We use cookies to provide the best possible shopping experience. Don't want them? Call in your order US Toll Free 877-822-3318.

FREE SHIPPING on orders $75+ delivered within the US - see details

How cool is this? Hades Alternative Footwear's amazing Raven boots were worn on American Idol - and purchased from us!

Gothicplus.com got the call from women's stylist Nra Kudelkara on April 2. We worked with Hades to get their fabulous Raven ankle boots rushed out to the American Idol stage in time for April 3rd Live Show:  "Rock 'n Roll - No Ballads Allowed" with the Final 7 contestants for Season 12.

You can see Angie Miller rocking the Raven boots in the show's opening below and during her killer performance of the Evanescence hit "Bring Me to Life". Angie's performance was voted one of the top 3 of the night.

The Raven boots have a definite rock star edge with their unique, spinal column 4 inch high chromed heel and 3/4 inch high platform. They have a flaming buckle adjustable strap at top, and TONS of silver rivets! In eco-friendly black faux leather, they make a definite statement. Angie loved them!

Hades Alternative Footwear is a beautiful collection of intricately designed shoes and boots for men and women made not only with elegance but a dangerously addictive sex appeal. Originally launched in 2010 as the brand Metropolis, Hades has grown into a well acknowledged designer and manufacturer of provocative heels and sexy footwear with a touch of alternative and designer taste that hasn’t been seen in our new generation of fashion, yet exploding worldwide in popularity.

Gothicplus has been an authorized dealer for Hades since their launch in 2010! We fell in love with their totally unique shoe styles as soon as we saw them and HAD to carry them! They have been consistantly strong sellers for us and we are so happy to see them recognized by American Idol and so many other celebrities. It is always exciting to see what cool new styles they will come up with every year.

See all the wicked looks we've provided to American Idol on our Idol Style page.

Spot one of the styles we sell in the media or on TV? Let us know and you might win it or a gift card! 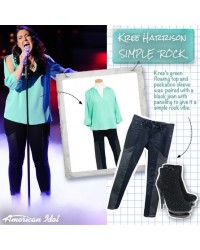 American Idol Boots
Once again, a contestant on American Idol rocked boots from Gothicplus.com! Pleaser USA's Fascinate 1011 ankle boots were worn by Kree Harrison as she nailed her performance of "What the World Needs Now is Love" being named in the top 2 of the night (along with Candice Glover). The Fascinate boots were one of several styles women's stylist Nra ordered from us, so keep your eyes pealed - you just may see more of our awesome styles on the show! Pleaser USA produces several lines of amazing footwear. The Fascinate style is part of their Pleaser Day & Night brand that combines bea..
Read More
American Idols Kree wears Fascinate Boots from Gothicplus.com 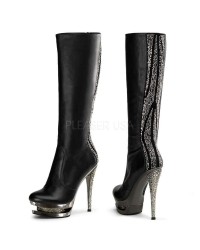 American Idol Boots
American Idol contestant Kree Harrison has been rocking the stage - twice in these spectacular Fascinate leather boots by Pleaser USA. On April 17, Kree wore them while performing "She Talks to Angels" by The Black Crowes and again on April 24, performing Susan Tedeschi's "It Hurt So Bad." The gorgeous Fascinate 2018 black genuine leather boots have a split 1 1/2 inch high platform with a 6 inch heel with a hand-applied rhinestone pattern up the back on a suede inset. The split dual platform is encrusted in more rhinestones which also cover the heel - boots truly made for a star! ..
Read More